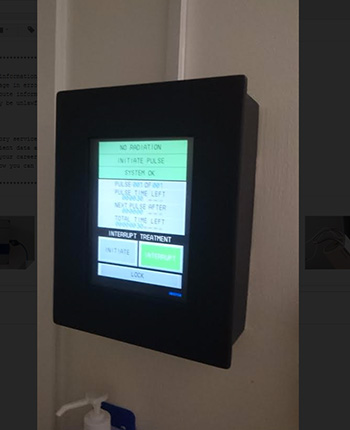 PDR (Pulsed Dose Rate) brachytherapy treatment is a radiotherapy modality combining physical advantages of HDR brachytherapy (dose distribution optimization as well as radiation safety) with radiobiological equivalency of LDR (Low Dose Rate) brachytherapy. At the beginning of the 90’s, a new technique was developed in order to mimic the radiobiological effect of continuous LDR, while taking advantage of the same stepping source technology developed for HDR (High Dose Rate) brachytherapy. Source strength was reduced from about 1 Ci (instead of 10 Ci). The total dose delivered is approximately the same as with continuous LDR. It is provided with a large number of small fractions (or pulses), lasting usually 10 to 30 minutes, typically one per hour, up to one per 4 hours.

PDR uses an Iridium-192 radiation source. The main advantage of PDR is a modern afterloading system offering over interstitial or intracavitary insertion of separate needles, tubes, seeds or wires. A dose distribution can be modulated flexibly to fit it to the treated volume (HRV/IRV) as well as OARs’ (organ at risk) constraints. This can be realised by setting dwell positions of a radioactive source, adjusting dwell times and by a combination of positioning of catheters, applicators and another types of interest. PDR brachytherapy and “pulse scheme” of building a dose distribution allows only for incomplete repair, aiming at achieving a radiobiological effect similar to low dose rate over the same treatment time, typically a few days. The radiation source is removed into a shielded safe after completing the each pulse what eliminates “environmental” radiation exposures and decreases a risk of delivery of an unintended dose to staff and visitors.